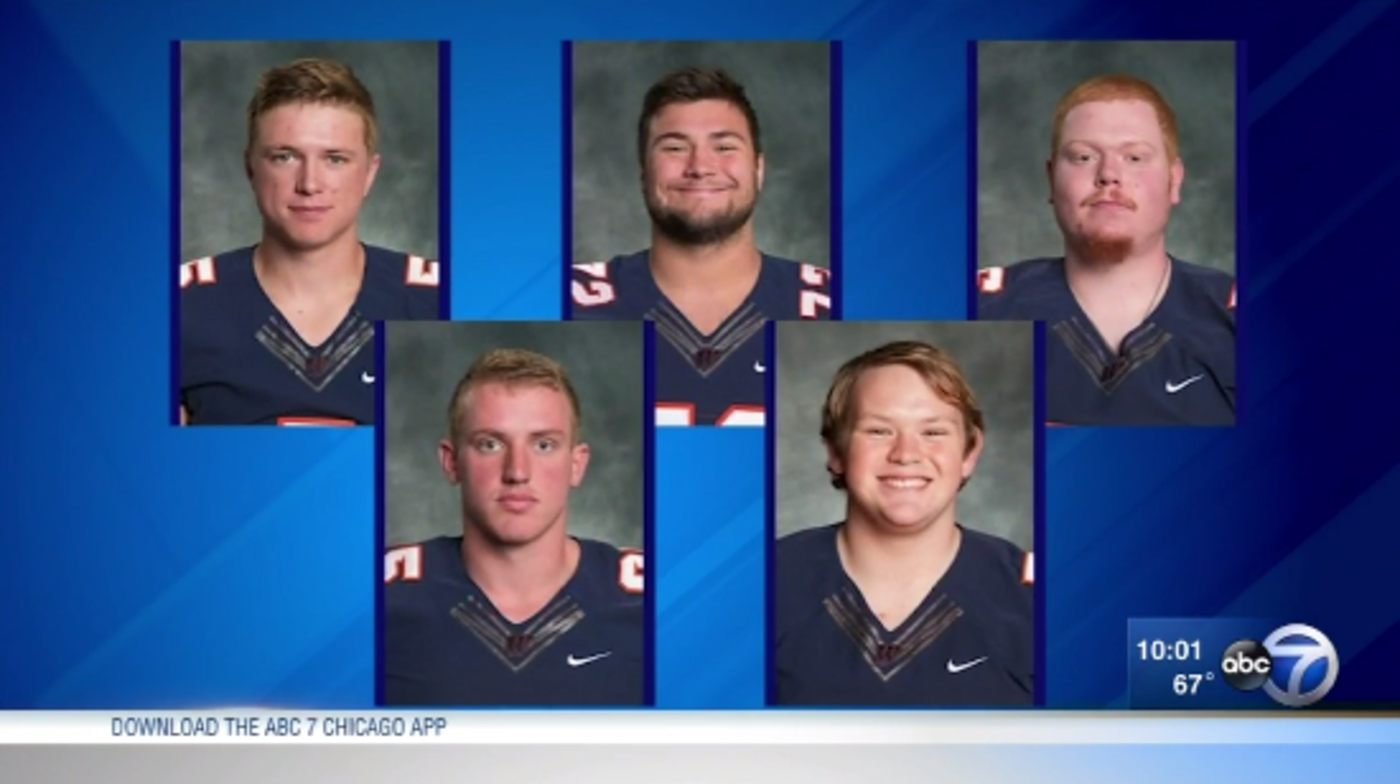 Five Wheaton College football players face felony charges after being accused of a 2016 hazing incident in which a freshman teammate was restrained with duct tape, beaten and left half-naked with two torn shoulders on a baseball field.

They are expected to turn themselves in to authorities this week.

Three of the accused played in Wheaton College's victory over Carthage College Saturday, and all were listed on the team roster as of Monday afternoon. The Division III program is ranked fourth in the country.

The victim, who the Tribune is not naming, left the conservative Christian school shortly after the incident and now attends college in Indiana.

"This has had a devastating effect on my life," he said in a statement to the Tribune. "What was done to me should never occur in connection with a football program or any other activity. ... I am confident that the criminal prosecution will provide a fair and just punishment to the men who attacked me."

The college released a statement late Monday saying it was "deeply troubled" by the allegations because it strives to provide an educational environment free from hazing and reflective of the school's religious values. The school said it hired a third party to investigate the allegation last year and took "corrective actions," but officials declined to provide details on any punishment, citing federal privacy laws.

Sources told the Tribune that several players were required to perform 50 hours of community service and write an eight-page essay reflecting on their behavior.

"The conduct we discovered as a result of our investigation into this incident was entirely unacceptable and inconsistent with the values we share as human beings and as members of an academic community that espouses to live according to our Community Covenant," campus spokeswoman LaTonya Taylor said in a statement. "We are profoundly saddened that any member of our community could be mistreated in any way."

The Wheaton Police Department earlier this year refused to release reports related to the incident under the state's Freedom of Information Act, citing a pending investigation. DuPage County State's Attorney Robert Berlin also declined to comment Monday through his spokesman.

The Tribune, however, was able to obtain records detailing the victim's statements to investigators.

This has had a devastating effect on my life. What was done to me should never occur in connection with a football program or any other activity.

The student told investigators that he was watching the NCAA basketball tournament in a dorm room on March 19, 2016, when several teammates entered the room and tackled him, according to the documents. The freshman kicked his legs and yelled at them to stop, only to be punched and have his bare legs and wrists wrapped in duct tape, the victim said.

The players put a pillow case over the 19-year-old freshman's head and took him from the residence hall. Though there was a "root beer kegger" taking place in the dorm that night, no students or college employees intervened as the freshman was carried out of the building, according to the records.

The freshman told investigators that he was placed in the back seat of a teammate's vehicle and held down by at least two players while others piled into the vehicle. After the vehicle began moving, the players played Middle Eastern music and made offensive comments about Muslims, according to the victim's account.

At one point, the players suggested to the freshman that he had been kidnapped by Muslims who wanted to fornicate with goats, the teen told investigators. They patted his foot and suggested he would be their "goat" for the evening, the records said.

The freshman told investigators that his teammates restrained him with more duct tape during the drive, pulled down his shorts and underwear, then repeatedly tried to insert an object into his rectum. After the freshman yelled at them to stop, he was beaten, he said.

The players drove to a park located off campus and carried the freshman onto a baseball diamond, according to his account. The players threw dirt on the teen, took his cell phone and left him half-naked on the field, he said.

The freshman, who had just transferred to the college, did not know where he was or how to get back to campus. The temperature that night was about 45 degrees, according to National Weather Service records.

About 10 minutes later, a second player was dumped on the field, he told investigators. The two were eventually driven back to campus by classmates who came looking for the second player.

The freshman returned to his dorm room, called his mother and then drove himself to the hospital. He suffered muscle tears in both shoulders, in addition to various bruises and scratches, the records said.

After he became overcome by emotion in the emergency room, a nurse called police and collected evidence, according to the records. His grandparents later came to the hospital and took him back to their home to spend the night.

The next day, his father drove to Wheaton College and moved the teen out of the dorm. He withdrew from the school a short time later.

The former Wheaton student said his injuries required two surgeries since leaving the west suburban campus, according to investigative records.

"We have all seen situations where young men have engaged in foolish and immature behavior," his attorney Terry Ekl said. "What was done to our client goes far beyond what is acceptable behavior or which can be dismissed as merely harmless hazing. We are hopeful Wheaton College will learn from this incident, and subsequent criminal investigation and charges, and may not in the future condone this type of conduct."

College administrators learned about the incident shortly after it happened from coaches and other team members, according to the school's statement. It immediately launched an internal investigation and college trustees retained experts to lead a campuswide review of its "anti-hazing policy and of the culture around how students treat one another in our campus communities, athletic teams and organizations."

"Wheaton remains committed to providing Christ-centered development programs and training to all our students," Taylor said.

Each year, Wheaton athletes must sign an anti-hazing policy that prohibits them from humiliating, degrading, abusing and endangering another person when they join a campus team or organization. Both teams and individuals can be punished for taking part in hazing rituals, according to the policy, which has been in place since 2014.

The players' status with the team remains unclear following the felony charges.

Kregel, Pettway and Spielman played in Saturday's game. Kregel, a 21-year-old center from Grand Rapids, Mich., was a second-team All-American center for the Thunder in 2016.

Spielman is 21-year-old defensive lineman from Columbus, Ohio. He is the son of former NFL All-Pro linebacker Chris Spielman, who currently works as a football analyst for Fox Sports.

Messages left with the players or their families were not immediately returned.

The team made national headlines nearly three years ago after players dressed up in Ku Klux Klan robes as part of so-called team-building activity in a campus gym. A group of 20 players, some of whom were black, parodied several movies, including "Bad Boys II," a 2003 Martin Lawrence and Will Smith comedy that pokes fun at the KKK. During the skit, the group wore Klan-style white hoods and robes and carried Confederate flags.

Players involved with the skit said it was intended to be satirical, but acknowledged it was inappropriate. They apologized to the campus community and asked for forgiveness. 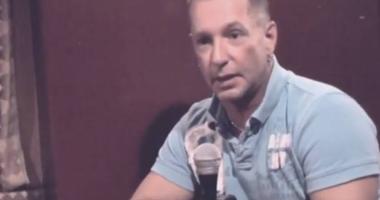 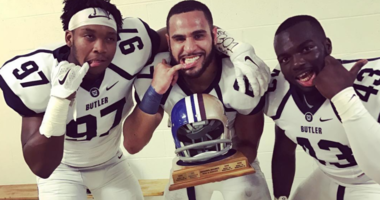 College Football Player Comes Out To All His Teammates At Once 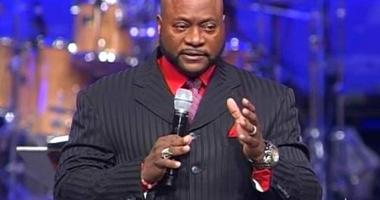